I’ve been reading the forums and I suppose that my issue isn’t covered because it’s less so to do with hair removal than general information about electrolysis setup.

I have bought a Carlton RF08 machine to do some basic removal of hairs growing out of moles and skin tags. Possibly not the best machine on the market but I wanted to dip my toes in and go from there. I have F2 and F3 Sterex needles, however, I’ve since decided that I’d prefer to actually remove the moles and skin tags altogether. I have had this professionally done before and thought I’d give it a go myself. Using those thin needles though makes it very difficult as they bend etc. This is obviously by design for when removing hairs, however, it is unhelpful when the aim is to prod and scrape blemishes.

So my question is: Are the best needles to use the Sterex F10s for this type of thing or are there superior alternatives? I’m not fussy on brand or whatever, only wanting to get the best result for removing such blemishes.

Oh and I’m a total notice, trying things out on my arms first. All moles have been checked by my doctors, who have confirmed that they’re safe to remove. Any help or pointers from those more knowledgeable with regards to techniques etc. would be great.

to do some basic removal of hairs growing out of moles and skin tags. Possibly not the best machine on the market but I wanted to dip my toes in and go from there. I have F2 and F3 Sterex needles, however, I’ve since decided that I’d prefer to actually remove the moles and skin tags altogether. I have had this professionally done before and thought I’d give it a go myself. Using those thin needles though makes it very difficult as they bend etc. This is obviously by design for when removing hairs, however, it is unhelpful when th

Please dont do this. You dont know what you are doing, absolutely can cause yourself considerable scarring and you lack the training to decern the difference beween harmless blemishes and potentially skin cancer.
You are also attempting to use what could be the RIGHT tool for the job completely incorrectly and are likely to cause serious damage and scarring as a result. The fine probes used in electrolysis are used to heat and dessicate the tissue they come in contact with. They are not “Scraping tools” and are not dessigned to be used for this purpose. It’s like watching someone use a fine woodworking chizel as a flat head screwdriver, except in this case it’s not the tool you have to worry about damaging, it’s the thing being worked on.

For more on what could potentially go wrong with your little experiment, I refer you to Mike Bono’s video " Dont Diagnose! " . Please watch this video and heed it’s advice. As a layman you do NOT know what you are looking at! 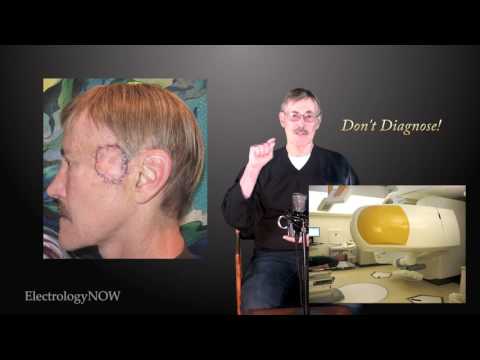 OK, thanks for this and I understand what you’ve said but I can’t quite get my head around why it couldn’t be a viable option. I’ve had a full check from my dermatologist and am planning to carry out something that I have seen in action many times, so surely this is not an incorrect use of a correct tool? I appreciate that I lack the training and proper understanding, which is why I won’t do anything hastily. It’s something that I’d like to gain am understanding of and train myself up in.

What you are doing is advanced electrocoagulation of the tissues. It’s not as simple as you suggest and there is a high probability of causing serious burns and disfigurement, indeed this may even be a best case scenario. Here in Canada we as estheticians arent permitted to do skin tag removals or mole removals, and in several US states this is the case as well. So you are asking us for advice on performing something that the vast majority of electrologists arent permitted to do under penalty of law.
The best I can tell you , is that you have the wrong idea, and you are doing it wrong. Ever watched someone cut styrofoam with a heated wire? Well cutting off a skin tag is much the same thing, almost like a knife through butter. There’s no need of physical force to scrape the thermolysis currrents do this for us. There’s 2 schools of thought when it comes to skin tags. One puts the probe perpendicular to the tag itself and gently put pressure while applying current ( a bit like a hot knife through butter) .The other is to use the end of the probe in several places around the perimeter of the neck of the skin tag in order to cause it to dessicate in small spots all the way around. . Either way you use the probe as the tool that it is, it is a vehicle to deliver thermolysis currents, and should easily penetrate flesh with the addition of currents.
Moles are aother creature altogeter. How deep do you dgo? How much tissue are you destroying? These are the considerations that an amatuer does not know when embarking on such a task. Do it wrong, and you could have serious repercussions. Thus why I said “dont do this” . At the end of the day if it’s a skin tag, I dont think most people here would have a problem given it is on yourself. But removing a skin tag on your own arm would be quite the gymnastics, and I dont think you would manage it, because you generally hold the tag out away from the body to give good access to the skin at the base of the tag, requiring two hands,one for the tweezers and one for the probe. . Not likely possible on your own arm.

Thank you for the full and proper response, I will reconsider. It is relatively inexpensive in the UK, where I am based, to go to a licenced practitioner, I just wanted to learn a new skill (slowly). Here, as long as you have a doctor from the National Health Service, they will operate on the mole for you and I already have these permissions.

I understand, having read up, that the best method for skin tag removal is as you’ve said and that it would therefore be virtually impossible to do myself. My plan was to tackle flat lesions first and then some of the raised ones after but I will take your advice onboard and reconsider my plans.

Long time ago, and after practicing electrolysis for about 10-years, I decided to remove my own mole (chest). I royally screwed it up! Nicely, I was working with Dr. Chapple, and after a bit of a reprimand (in his ever-so-British manner), he finished the job.

This particular mole required scalpel (cut off) and stitching … it was NOT appropriate for either a hyfrecator or electrolysis current (a deep mole). No scar after it was removed properly. He did a sort of “scarf” flap … amazing what plastic surgeons can do (and dermatologists don’t).

In my State, any suspicious tissue removed from the skin must be examined by an outside expert … there are no exceptions. Because, in my own “face cancer” case, even Dr. Chapple got it wrong … but, it was confirmed by biopsy. So I had to have my head radiated … what FUN!

Keep your “cotton pickin” fingers off your moles! BTW the “flat lesions” are more risky than the ones with a “neck” for a number of reasons. But, I ain’t givin’ you no advice … Except. don’t do it, honey!

Thanks, message received, loud and clear! Quick question though, would you have got the mole checked out at all if you hadn’t screwed up the removal? I must have 200 small moles on my body; i don’t know how to ever know when to check them etc. Our healthcare system, whilst free at the point of access, isn’t generous, so visiting a doctor to have them checked is often a case of them having a quick look, declaring them fine and then you’re sent on your way. Not the fault of the professionals, it is just chronically underfunded. Our laws would then allow us to have them removed via whatever means a clinic deems it appropriate to.

Great discussion and even greater advice from my colleagues!

My quick 2 cents here about moles and hair: Mole hair is very deep if it is coarse or very coarse. Some people think if the mole is removed the hair is removed. Far from the truth.

Yes, it’s been very helpful. Actually, going back to my first thought, do you also warn against doing any more traditional electrolysis work on moles. I.e. Removing hairs? I know that it’s always better to go with a professional but of course lots of people DIY more traditional hair removal, so is this OK to trial?

Electrolysis is great for hair removal in moles. It is always wise to have the moles examined by a physician first and for the physician to write a prescription giving permission to remove the hair. I love the blend method for the big, fat mole hairs, but thermolysis will do just fine, as well! Electrologists have been treating mole hairs for over a century with brilliant success. It is the only thing on earth that can accomplish this and there are no contraindications if the mole it is examined first.