How do you know it is working + experiment

Hi, I’m actually a graduated/licensed electrologist but I am posting in DIY since that’s been most of my experience. My question is, how do you know if the electrolysis has sufficiently treated the hair? From what I’ve heard and read, you should not feel any plucking, and the root sheath should be extracted along with the hair. Am I missing anything?

I ask because I did a test sample on my legs with my Apilus junior 3G machine. I tried omniblend as well as flash. It was 6 weeks ago that I started the test after about 6 months of untouched hair growth in the area. I also did a “pluck only” area on my leg as a control, but it seems like the regrowth has been the same for each area despite me not feeling any plucking and seeing the root sheath on each hair…?

If it helps I was using level 5 default leg setting, which I believe is 8 seconds and 0.54 mA of galvanic with 11% thermolysis on omniblend (combined/simultaneous blend), and for the flash area I was doing a single 0.10 second pulse at 93% energy. According to the attached image this is 968 EI for the omniblend and 865 for the flash attempt. Apparently Apilus recommends that I don’t go over 800 EI in order to avoid over-treatment yet this seemed to do nothing to affect the hair growth in the area despite being over the “coarse limit”. I found the EI image on this article: Electrolysis Overtreatment - Follikill Electrolysis Toronto

I’ve also attached some images of my leg experiment, I didn’t treat a very large area but I think it shows my point, it’s a 1x1" square that I’ve been painstakingly re-drawing on my legs for the last 2 months. If I had 6 months of untouched growth prior to this treatment then any regrowth should be actual, not apparent I would assume? To me, it looks like around 30-40% regrowth so far and the treated areas honestly look the same as the pluck-only “control group”. I’ll keep this thread updated with future updates and future experiments I do! I hope to eventually become an electrologist and work on others, and I’d like to see promising DIY results first 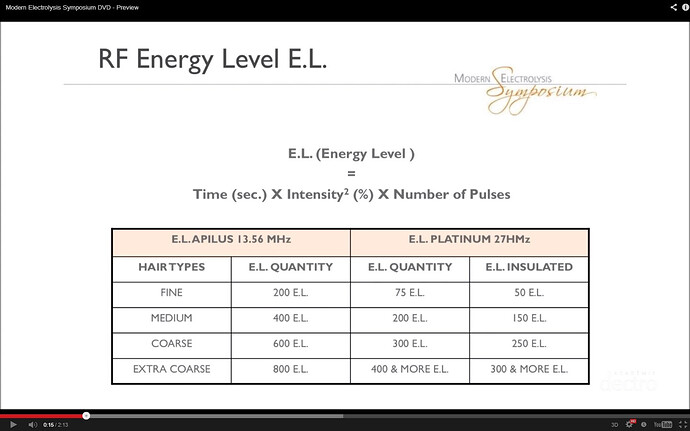 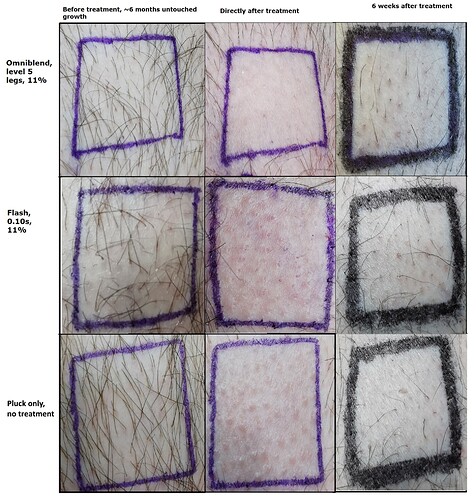 You would have to wait 1 full hair growth cycle ( approximately 5 months) to see the reduction. Anything you see coming in before that time is out of cycle hairs that were going to grow anyway, IE apparent " regrowth.
To really see the effect, here’s what you have to do:
First dont touch the area for 5 months. No plucking, shaving waxing,
Clear the entire area in your chosen modality and go after each hair like each one, is the “most important hair of your career, nothing is more important that destroying that ONE hair” . Then Dont touch the skin in the area for 5 months.Then take a picture. Do it all over again Clear the entire area and dont touch it again for 5 more months.do it again. Take a picture before. and a further picture 5 months on.
What you will see is a steady decline with each successive cycle of growth.
Only then, will you come to truly understand the power and effectiveness for your chosen modality.
That process created by, and shared by, one of the greatest electrologists who ever lives. she pops in from time to time.

Thanks for the response! I did leave it for about 6 months prior to the first clearing so I would imagine all of the hairs would have grown for it and been cleared. So why isn’t everything that’s currently growing regrowth? Are there hairs that stay in telogen/catagen for more than 6 months without breaking the skin? I guess that’s where my confusion lies. If everything I am currently seeing is regrowth then I don’t understand why the blend/flash and the “pluck-only” control test look the same, since that would imply the same amount of regrowth so far and thus no difference after a treatment? So doesn’t that tell me already that I am not using enough power? I think my insertions are generally good since I’m quite sensitive to the feeling of bad insertions and I don’t feel anything when the probe enters the follicle.